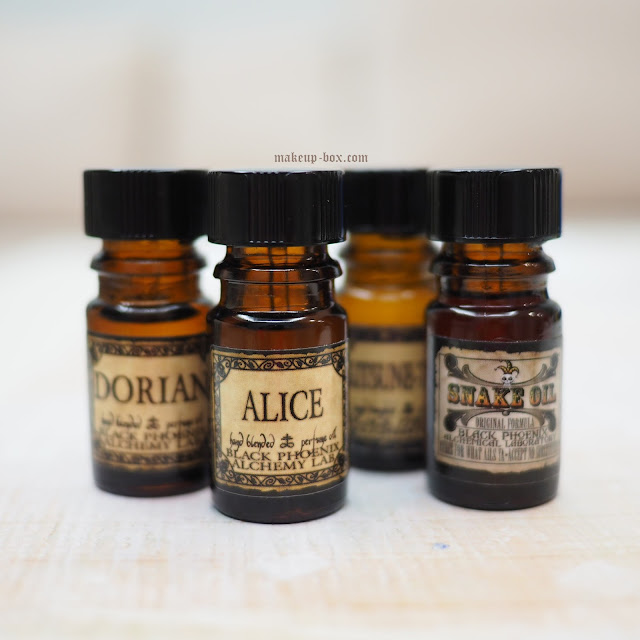 I'm a compulsive fragrance polygamist. I love perfumes but have zero attention span so I go from scent to scent on a daily basis; sometimes multiple scents within a day. Which can be an expensive hobby.

And then I discovered Black Phoenix Alchemy Lab (BPAL for short), which is a little piece of niche heaven because there are so many options to choose from - upward of 600+ at any time - in manageable sizes and prices (compared to other niche perfumes). And as it so often is, instead of saving more because the unit cost is lower, I end up trying way more items for the same price.

The essential oil-size bottles contain at least 5ml and cost mostly between US$17.50 - $24, although there are a few lines that are priced at a steep $30. From what I understand it mostly depends on the whether BPAL has to pay licensing rights for the intellectual property; names and art on the bottles. E.g. Crimson Peak, Coraline, etc. $17.50 seems expensive, ml for ml compared to even high-end pur parfum. However what you need to remember is these are more concentrated than typical parfum extrait today, and one bottle lasts for months and months. You absolutely do not apply these the way you would regular alcohol-based perfumes.

Concentrations vary between formulas but some contain as little as 20% carrier oil.
This doesn't mean "80% essential oil", which would be alarming and not for direct topical application on skin (not to mention overly pungent and often unpleasant to smell). Many fragrance compounds come already pre-cut from ingredient suppliers. I can only say I haven't had a single issue with any of the BPALs I tried, but as with any beauty product, you should test a tiny bit on your skin and monitor for any reactions regardless.

Some of the best BPALs come from the general collection, which is great because they're available year-round. I always ask readers to start with the Beloved Favorites section. These are the bestsellers over the years - classics like Snake Oil, Dorian, Alice, Bliss, etc. And the non-limited edition scents can also be purchased as $4 sample vials.

After testing a few of these you will begin to get a sense of what notes you like from BPAL, and from there, which other scents have similar notes. Likewise, you start to know what notes to avoid on yourself. I personally love BPAL's vanillas, honeys, and cocoa notes on my skin. Most of their florals are ok - the fruits are hit and miss with me. (I say me because it's affected by skin chemistry.) I find their vetiver a little too bitter and medicinal for my tastes; it reminds me distinctly of ginseng, and I'm just not sure if I want that in a perfume. Their orris is also a note that doesn't work for me - I smell a fetid, unpleasant, "wet animal" stink which I don't really see other reviewers mentioning.

BPAL uses a lot of natural compounds in their scents (I've never seen any official confirmation or validation from the company on whether it is 100% so I don't want to say it is all-natural). A lot of people say they use synthetics because notes like lilies, orchid, chocolate do not exist in nature. However it IS possible to obtain these through blending several natural essences. More expensive for sure, but definitely possible. And I've also seen people describe Candy Butcher as "fake-smelling chocolate" when ironically, this is the cocoa fragrance where I see actual bits of cocoa absolute floating in the oil. It all boils down to skin chemistry and your nose.

As a base, I'm quite certain they use fractionated coconut oil (or if they use mineral oil, a very high-grade one) because typical organic oils will go rancid after a few months; something to watch out for if you are buying fragrance oils from other companies. People have 5, 10 year old BPAL bottles where the scent ingredients have "aged" and mellowed like good rum, but the product has not gone rancid, which is the only reason I feel safe amassing such a big collection from them.

The Bpal.org forum is a fantastic resource for tons of reviews about absolutely every scent BPAL has ever released. You can get a better idea of how a scent smells on different people, which notes are stronger, how long it seems to last, etc. I would say to never blind buy a bottle without at least reading the latest/newest reviews, because BPAL hand-blends their scents in small batches for freshness, and the proportions as well as the raw materials (how strong, how sweet, how sour, etc) can vary a bit from batch to batch especially since a lot of naturals are involved here.

I will only cover two of my general-catalogue favorites in this post just to keep things short - the rest will need some time to go over!

Snake Oil
Described as: Magnetic, mysterious, exceedingly sexual in nature. A blend of exotic Indonesian oils sugared with vanilla.
My experience: Initially in the bottle, it was medicinal patchouli (maybe with a little clove and/or cinnamon) dribbled in sugar syrup to me. But on the skin, this warms up to a warm, ambery powdery scent that smells a bit like old-school European talcum powder - and also the soft enveloping dry-down of Guerlain's Shalimar. I got several compliments when I started wearing this; oddly enough all from men.

Dorian
Described as a Victorian fougere, with three pale musks and dark, sugared vanilla tea.
My experience: I don't smell much musk; it's mostly a very creamy vanilla with aromatic black tea and a bright tangy twist courtesy of either bergamot or lavender. This is sweet and quite gourmand, but it's not a dark tea. It's creamy, luscious and blonde.

Both scents I did not like straight out of the bottle when I first got them. Snake oil was medicinal and Dorian smelt a bit flat and odd. Which brings me to the last two points you should remember about BPAL.

I have a backup for my backup of Milk Chocolate, Myrrh and Gunpowder, because it will likely never be available again after it sells out. It's not a scent I recommend for everyone, but for me it is pleasingly odd. You have something that makes me salivate; a fudgy, almost buttery melt-in-your-mouth chocolate note, juxtaposed against incense-y myrrh, and smoky gunpowder. I don't know WHAT possessed them to think of this combination but I love it to death.

(For less adventurous gourmand lovers, try Bliss, my favorite single-note chocolate scent around, bar none. Not fake wax-fragrance body-lotion chocolate. Not oily cocoa butter chocolate.) This smells like melted chocolate with a hint of Nutella/Gianduja. I have to close my eyes involuntarily whenever I take a deep breath of it because it does induce a moment of bliss. All the chocolate scents I've tried over the years have either become straight vanilla after 10 mins or smelt a bit fake and flat.

Until BPAL - from whence I have amassed quite a number of chocolate-based scents:

To see a few more short reviews and discussions on some other BPALs in my collection, check out my Dayre posts here, here, here and here!
Posted by CandiceC at 3:23 PM