Seems this is the month for daring lip colors; even the venerable house of Dior has launched their edgy Dior Rouge Mattes, in shades I never thought I'd see under the CD banner.

Besides shades and finishes, the packaging has been slightly "upgraded" as well. (Hint: look under the caps and you'll get a Louboutin-esque indication of which tubes are from the new collection and which are older.) Aside from a whole host of pretty, lady-like shades, there are also some incredibly daring ones - including the 4 Matte "It" shades ranging from a chic dusty grey to a deep dark navy that looks almost black in the tube. 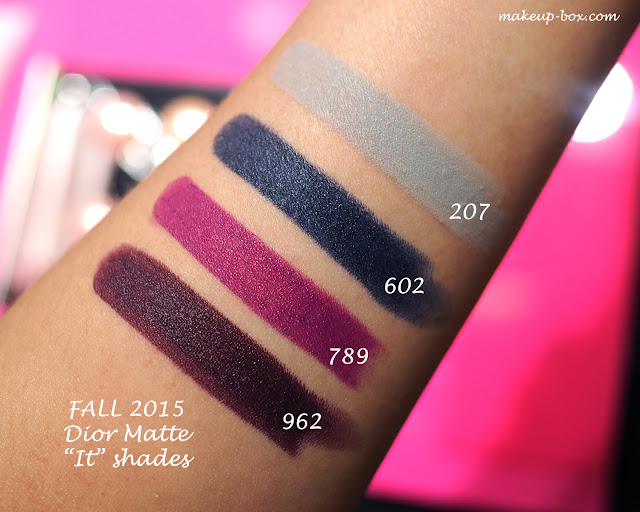 I love all of them, but 789 is a pretty standard bright wearable violet (if any such shade can be called "standard") and something you can find from many brands from Urban Decay to NYX to MAC. 207 Montaigne is ultra-cool but more of a mixer shade to do interesting dusty ombre looks, unless you are super porcelain-pale, in which case you can probably wear it on its own.

My personal picks were 602 Visionary, a navy which swatches a lot more vibrant and less black than it seems in the tube, and of course 962 Poison. This color is named after their iconic Poison perfume, and mimics the deep prune-purple bottle.

First off, the formulas are very smooth and creamy, rather lightweight for mattes, which is in keeping with the Rouge Dior line in general. Swatched on the wrist, they are less pigmented and dense than Diorifics (my forever fave) but you can definitely build these up to opacity. The good news is they don't feel heavy or dry on the lips, but if you really want an ultra-matte finish you will need to blot because these do have a comfortable low sheen and are more the "comfort matte" type of texture.

I do need to remind everyone that I am shooting freshly applied lipstick in front of a bright lamp. In real life, after the lipsticks have had time to set a bit, they will always look more matte and less "creamy".

I personally feel Poison is an ultra dark purple (much darker once on the lips than it seems in the tube) that suits medium to dark skins beautifully. Pale skins CAN pull it off but it tends to look prettier as a stain, and extremely goth if worn full on.

Be aware that it has very little red or rose and can make you look a little washed out if you don't balance it out with some blush etc.


As for 602 Visionary, this goes on sheerer than I'd expected. Somewhat disappointing because I thought I would get a thick dense dark indigo. The good news is it's not opaque in one coat, but you can build it up quite easily, although it will never look as black as it does in the tube. When you do get it built up though, it really slays.


(And I love the image of someone pulling out a classy Dior lipstick to touch up their punky deep blue lip.)

Definitely a shade I suggest wearing over a navy eyeliner or even black. 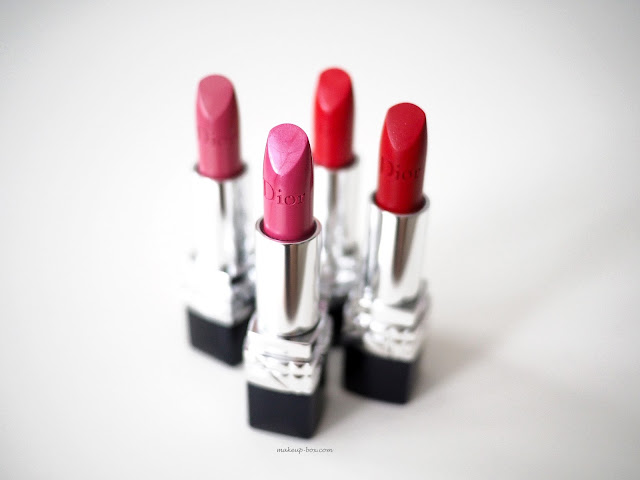 Now if those two were not your cup of tea, here are the extremely wearable "It" shades for Fall 2016.

There are two pinks and two reds, each with a different undertone.

999, Dior's classic scarlet, has been reborn in a matte variation (the Dior gods seem to have heard my prayers). I'm the sort of girl who feels if you're going to wear a scarlet, it should be as rich and unapologetically fierce as can be. Rouge Dior, comfortable and silky as it is, does not give me the intense Ruby Woo intensity you see on Natalie Portman in ads. Not unless you layer it over red liner that is. And this matte version does give a higher degree of intensity, even though it does go on a bit brighter, warmer, and not as deep as you'd think compared to the creme version. 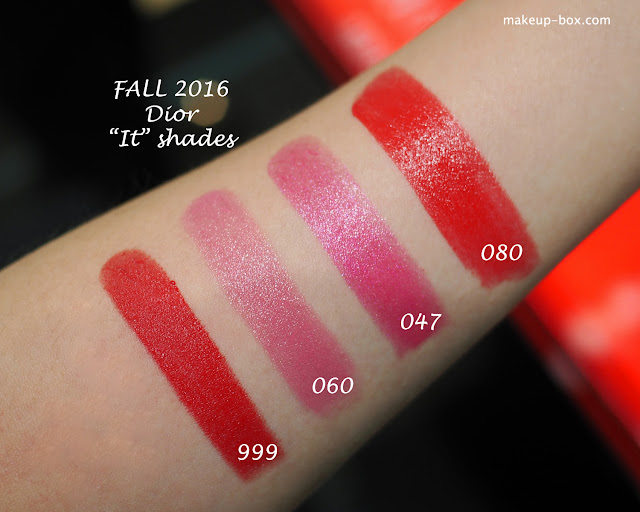 Still, the other shades are no push-overs.

I remember putting each one on my lips and repeatedly thinking "okay, I like this one best".

Premiere is a warm peachy pink with a soft gold pearl. There's a fleshy, sexy beige undertone to it and the texture is so smooth that I can already see this becoming an everyday kinda shade.

If you described 047 to me (bright medium warm pink with a cool pink pearl) I would have thought "eek 80's makeup" and avoided it. But dang - it is purtty. There is enough of a warm fuchsia undertone to give it some depth and stop it from going pale and frosty, but the overall effect is still soft and wearable.

This is one of those shades that looks the least accurate if you look at visuals on the Dior site, so definitely look at swatches or go down to the counters instead of buying right away.

Now 080 Red Smile is an interesting color. It's red. But a brighter, lighter and more vibrant red compared to the scarlet 999. There is an undertone of coral to it, which really brightens the face. I think it would absolutely divine on those with very pale skins.

Now 999 Matte. Definitely a red red. But also leaning a bit towards the warm spectrum once applied. There is almost a little cherry-tomato undertone in there, so don't just buy this expecting a deep blue-toned red (which is what Natalie Portman looks like she's wearing in the ads - those are always somewhat misleading). It's still gorgeous though, and what I consider a rather universal shade for most skins.

Like the other mattes, this has a smooth satin feel and a lightweight texture.