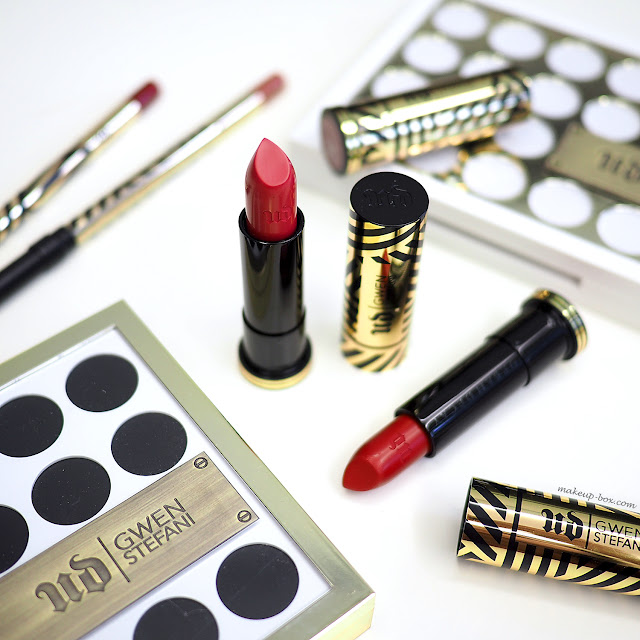 To round out the UD x Gwen collaboration and complete your Gwen "look", we now have a gorgeous blush palette, a line of lipsticks, brow box and matching lip liners. This second batch of products will hit shelves in Singapore on 3 March 2016.

I do have to say I'm more excited about the blush palette in particular, because there aren't that many high-end blush palettes out, and I just love how handy they are in general.

You get 6 x 2.8g of product for SG$78, and these are all rather soft shades curated by/for Gwen, so you can expect that these would mostly work better on light-skinned girls. You rarely see her with strong bright blush, so these are designed to be flattering and subtle and complementary to a smoky eye or a strong lip.

There are 4 blush shades in a good variety of warm to cool tones, as well as a nice neutral highlight shade called Angel, and a skin-warming bronzer called Lo-Fi, created to mimic the Instagram filter of the same name. 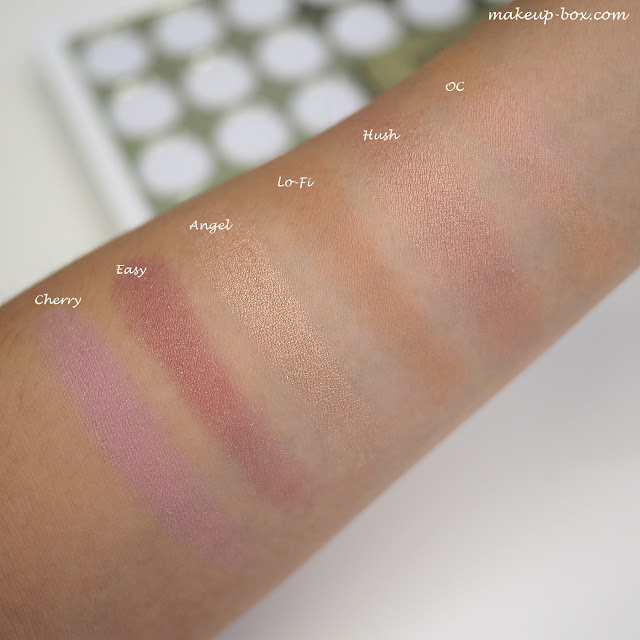 I can already tell you outright that even if you have medium-tan skin some of these shades will not show up well on you. Cherry would be slightly ashy, and OC and Hush would blend right in. Lo-Fi is a nice bronzing shade only on the fair.

Angel (highlighter) and Easy (plum rose) are the two shades that would work well on a wider range of skin tones.

I do personally love this palette because the shades are all extremely fine and silky - not chalky and flaky at all. However I have to say in terms of versatility it's a bit lacking due to how soft most of the colors are. With soft shades like OC and Hush, there really is a limit to how much you can build them up. (As opposed to soft beige-y tones from NYX and Tarte which look pale but actually come out quite strong when layered a few times.)

Then again - this is the first (and currently only) blush palette Gwen and UD have come up with together, based on what she herself would wear, so obviously it wouldn't contain 28 shades of blush from peach to dark magenta.

All in all, worth a look if you have pale to medium-light skin!

As for the lipsticks, these cost SG$33 each and I've swatched them below for your reference.

They come in a variety of finishes - from sheer to cream to soft matte, and mega-matte.

I do like all of the colors - they are very beautiful and wearable, if quite strong mostly. Ex-girlfriend is the only shade which might be appropriate in a more conservative work or school environment. It's not my favorite in terms of pigmentation because it's not particularly even in application, but that's saved by the fact that it is a warm beige-tone so the unevenness is not going to show up.

Firebird is a glorious magenta with a blue-pearl. Very fun but remember if you like over-drawing your lips like Gwen does sometimes, you might want to use a matching toned lip liner and avoid applying the pearlescent lip color over the areas where you have overdrawn, because the extra shine will make the "fake lipline" much more obvious.

For me, the pièce de résistance are the 4 red-toned shades. Spiderweb is a glorious cool-toned ruby similar to Russian Red but in a creamier format. Wonderland is a skin-brightening fuchsia-red; a nice mix of fun and classy. Rocksteady is a vampy deep wine red for evenings, and 714 is the only Mega Matte, and your first chance to check out the new Mega Matte lip formula from UD which will come out later this year.


We all know Gwen was reputed as a hardcore fan of Viva Glam I in her 90s years, so I felt compelled to swatch 714 beside some of the classic celeb-faves from MAC so you can have an idea of how it looks and whether you should check it out if you already own those shades.

Honestly it doesn't look exactly like any of them. The closest might be Ruby Woo, but 714 has a tiny hint of pink undertones compared to Ruby Woo and isn't quite "as red". The matte finish is very similar in appearance, but the 714 formula is superior in the sense that it's one of those new-generation mattes which is very lightweight and smoother to apply. You can pretty much get this look with one firm stroke, versus about 2-3 strokes to build up Ruby Woo because it is so dry and dense.

As for Russian Red and Viva Glam I, these are darker, and also have a bit more of a shine in comparison. A lot of people prefer these to Ruby Woo because they are a little less drying on the lips, and 714 has a similar feel and application, although it doesn't have the shine. So if you like the look of Ruby Woo but hate the texture on the lips, 714 might be your best bet.

I personally feel the UD Mega Mattes would be very worth waiting for - if the other shades have a consistent texture with 714.
Posted by CandiceC at 8:00 AM