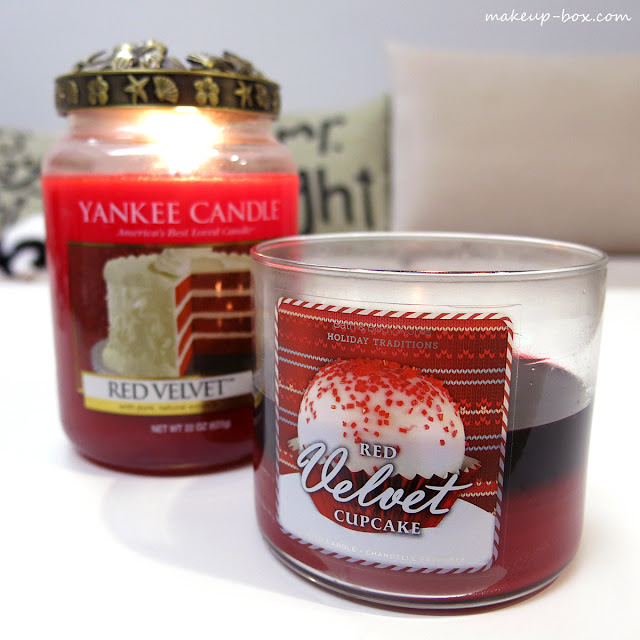 Red Velvet Cake is one of those things that is a little odd when you think about it.
It's chocolate-flavored but not really chocolate. It's colored a vivid red with food coloring (eww). And it doesn't taste quite like chocolate cake, vanilla cake OR cheesecake. Unlikely as it is - it's one of those things that has just developed its own unique charm, and I'm one of the ones that enjoys eating it, AND smelling it. Any time of the year.

As always, cold and hot throw is extremely different. If you're one of those people who've picked up a jar in the store, sniffed it and gone "Gross!" and wondered at how heavy and cloying it would smell in your home, you might be pleasantly surprised when you actually melt one. A lot of the bakery scents from Yankee and Bath and Body Works are actually softer than many of the fruit and floral scents. And these two smell pretty authentic when the scent is released from hot wax.

Yankee's Red Velvet is described as:

A most decadent creation of creamy frosting atop moist cake and a touch of brown sugar. So very sweet!

I don't know if there's cream cheese in there as a note, but it is the more buttery and savory of the two, and heavier on the frosting.
The throw is pretty good for a single wick mottled wax large tumbler, although it's not an extremely strong scent to begin with. I've not had any problems with my jar tunneling and the scent smells true and hasn't gone smoky or odd after about 3-4 burns. If you smell it beside a Frosted Cupcake candle, you will be able to tell the difference, but on its own, the chocolate note isn't really that noticeable.
Large 1-wick mottled wax jar burns 110-150 hours, and this has performed consistently well into the 4th burn, without noticeable sooting or tunneling.

Bath and Body Work's Red Velvet Cupcake is described as:

This Southern classic is perfect for the holidays - rich vanilla frosting and authentic red velvet cake. 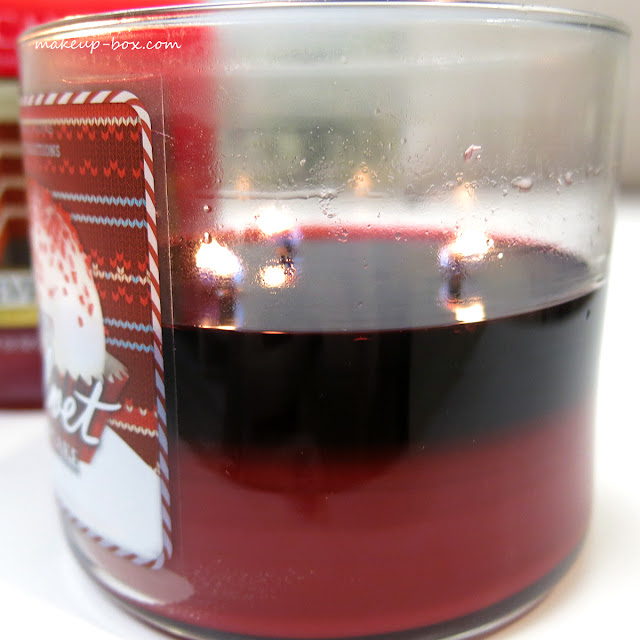 Of course, if you're one of those that burns your candles for just an hour or so, and want to blow it out instead of leaving it going for hours, Yankee's mottled wax large jars are just not the best option for you because it frequently takes up to 3 hours for a full wax pool to form, which means you need to let it burn for a longer time before you can blow it out. Otherwise you run the risk of causing your candle to tunnel.
Posted by CandiceC at 12:22 AM